The driver of the stolen vehicle has been identified as Devonte Robert Warfield, 18, of Hagerstown.

On April 28, 2017 at approximately 5:15 PM, members of the Washington County Sheriff’s Office, Hagerstown Police Department and the Maryland State Police Apprehension Team located Warfield in the West end of Hagerstown. A traffic stop was conducted on the vehicle Warfield was traveling in. Warfield was found to be in possession of a handgun at the time of his arrest.

It was determined that after the vehicle pursuit on April 18, Warfield fled the scene and was not taken into custody. The three other individuals in the vehicle during the incident were detained and later released. They have been identified as juveniles and currently do not face charges.

Warfield is currently being held at the Washington County Detention Center with no bond. 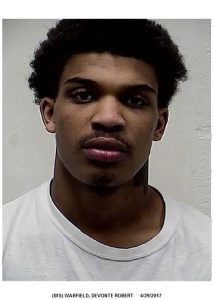