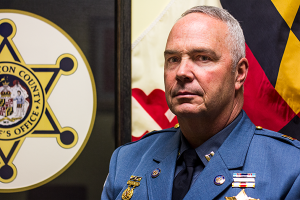 Major Mark Knight is a 1982 Graduate of the Smithsburg High School and a 1984 Graduate of the Hagerstown Community College with an AA Degree in Administration of Justice.

Knight began his law enforcement career in March of 1985 when he was hired by the Washington County Sheriff’s Office as a correctional deputy in the Detention Division. He graduated from the DOC Correctional Academy that same year. He transferred to the Patrol Division and graduated from the Western Maryland Police Academy in 1986.

Knight made his way through the ranks and was promoted to Sergeant in 1995 and supervised his own patrol group. In 2002 he was transferred to the Criminal Investigations Unit, supervising the detectives in that unit, and maintained the evidence and property room for the next 12 years. In that unit, he achieved the rank of Lieutenant.

In 2008 Knight was selected as the Maryland Sheriff’s Association Deputy of the Year for Valor for his role in the 2007 incident where Smithsburg Police Officer Christopher Nicholson was killed in the line of duty.

Knight is married to his wife of, Christy, and has two children, Brandon and Karah. 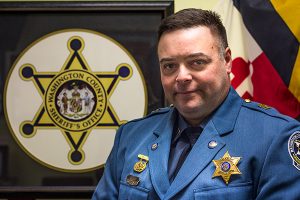 Kerns made his way through the ranks of the Patrol Division being promoted to Corporal in 1999 and later Sergeant in 2005. During his time in Patrol, Kerns served as a Field Training Officer and Assistant Shift Supervisor.

In June 2014 Kerns was promoted to the rank of Captain-Investigative Services. His responsibilities include oversight for the Criminal Investigative Unit, Narcotics Task Force Agents, Digital Investigations and Forensics Unit and the Traffic Criminal Interdiction Unit.

Kerns is married to his wife Kathy and has two children, Matthew and Danielle.

Founded in 1986, The Washington County Narcotics Task Force is comprised of members from the Hagerstown Department of Police and the Washington County Sheriff’s Office. The NTF is responsible for the investigation, arrest, and prosecution of persons who violate the controlled dangerous substance laws of Maryland, regardless of the sophistication of the illicit operation. The office is currently staffed by fifteen personnel to include five officers from the City Police, five from the Sheriff’s Department, an Intel Analyst, one full time prosecutor from the States Attorney’s Office, one part-time prosecutor/nuisance abatement attorney, and two support staff.

The NTF is housed with the Drug Enforcement Administration and the Maryland State Police at the DEA’s Hagerstown Office and works closely with Hagerstown’s Street Crime Unit. This pooling of investigative resources benefits each investigative unit with increased manpower, less duplication of effort, and by coordinating the targeting of drug offenders. Some of the NTF agents are also federally deputized members of the DEA, which gives these local agents enforcement powers anywhere in the United States. This has been very beneficial since drug violators frequently move through the tri-state area.