On April 20, 2019 at approximately 1:41 am, Deputies responded to Break Away II Sports Lounge, 13726 Pennsylvania Avenue Hagerstown, MD, for a reported stabbing.

Upon arrival, deputies made contact with the victim, who was stabbed in his right forearm. The victim advised that he and his girlfriend went to the liquor store, which is part of the business, to purchase alcohol. When they arrived they realized that they forgot their identification which is required to purchase alcohol. The victim advised he saw a male, later identified as Bernard Vincent Noll, walking on the sidewalk outside the business and asked Noll if he would purchase the alcohol since they forgot their identification. Noll agreed and the victim gave him the money for the transaction.

Noll entered the liquor store and exited a few minutes later, walking past the victim in his vehicle. The victim asked Noll for the purchased alcohol and Noll refused. A physical altercation ensued between the victim, Noll and another male who accompanied Noll, during which the victim was stabbed by Noll.

Deputies were able to review security footage of the incident and Noll was identified by his identification used to purchase the alcohol.

The victim was transported to Meritus Medical Center for the treatment of his injuries.

An arrest warrant was issued for Bernard Vincent Noll, 33 of Greencastle, PA, and served on April 22, 2019.

Noll has been charged with Assault 1st Degree, Assault 2nd Degree, Reckless Endangerment, and Theft Less than $100 and Dangerous Weapon Intent to Injure. 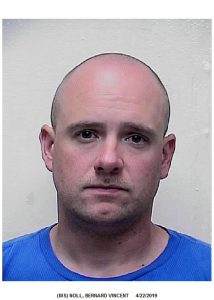