The Washington County Sheriff’s Office has arrested a Hagerstown man for armed robbery.

As deputies were speaking with the victim and her husband, the husband received a phone call from the victim’s cellphone on his phone.

A subject, who identified himself as “Marcus”, stated he found the stolen cellphone in Doub Woods Park. A Deputy went to Doub Woods and contacted “Marcus”. The Deputy recognized “Marcus” to fit the physical and clothing description of the suspect. “Marcus” was placed into investigative custody. After further investigation, “Marcus”, who was later identified as Marco Darwon Carson, 37, was positively identified by the victim as the suspect who robbed her. Carson was also found to be in possession of the victim’s stolen property.

Carson is currently being held at the Washington County Detention Center on No Bond. 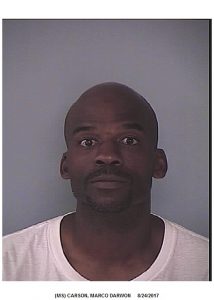