On February 24, 2021, at approximately 5:00 PM, the Washington County Sheriff’s Office responded to the 10300 block of Lantern Lane, Hagerstown, for a reported burglary.

The victim advised that at approximately 3:15 PM, she heard the doorbell to her home ring repeatedly. The victim stated that she looked through the window of her front door and observed a black male wearing a black hooded sweatshirt, camouflage mask, blue jacket, and black pants standing at her front door. The victim was not expecting any visitors or deliveries, so she did not answer the door. The victim went to the upstairs level of her home.

The victim advised that although the male was wearing a mask, she believed he was the same male who is known to live in a vehicle parked at the end of Stagecoach Dr, Hagerstown, MD. The Deputy was familiar with that male, identified as Antonious De Mond Bizzard Jr (B/M 6/12/97).

Before responding to this call at approximately 4:30 PM, Deputies responded to Arby’s restaurant at 10306 Arnett Drive, Hagerstown, MD, to assist Maryland State Police (MSP) with an active disturbance. The Deputies helped detain a suspect who caused the disruption and assaulted an MSP Trooper. The suspect was identified as Antonious De Mond Bizzard Jr. Bizzard was wearing a black hooded sweatshirt, blue jacket, camouflage mask, and black sweatpants when arrested by MSP. Bizzard’s clothing matched that of the suspect male in the burglary.

Bizzard has been charged with Burglary- Fourth Degree- Dwelling 2-3030 and is currently being held at the Washington County Detention Center. 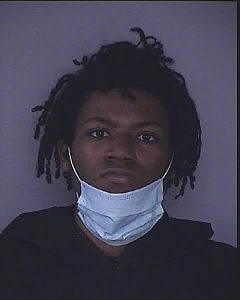