On February 15, 2019, it was reported to the Sheriff’s Office that a male, identified as Chad Eason Frobouck, 40, of Hagerstown, was attempting to hire someone to commit a violent home invasion and robbery.

A Detective communicated with Frobouck, and Frobouck solicited and conspired for the crime to happen.

Frobouck was contacted and Detectives arranged a meet-up with him in order to receive payment. Frobouck was taken into custody without incident at the designated meet-up location.

Frobouck has been charged with Solicitation/Conspiracy to Commit Home Invasion.

Frobouck is currently being held at the Washington County Detention Center on no bond. 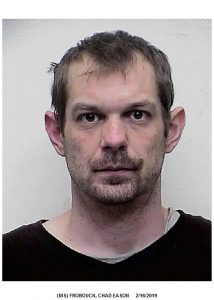