The Washington County Sheriff’s Office has arrested a Hagerstown man for robbery and vehicle pursuit.

On September 21, 2017 at approximately 3:00 AM, Deputies were dispatched to 10600 black of Greenwich Drive, Hagerstown, for a reported robbery.

When the Deputy following the Fusion activated his emergency lights and sirens, the Fusion did not stop and continued at a high rate of speed.

The Fusion fled from deputies for approximately 19 minutes, ending on Downsville Pike, just south of Carty Lane, after spike strips were utilized to flatten the tires.

The diver of the Fusion was taken into custody and identified as Trevor Daniel Hatcher, 18.

Hatcher was transported to Central Booking without further incident.

Hatcher has been charged with Robbery, Assault, Theft and numerous Traffic Violations. 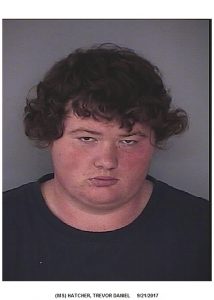