The Washington County Sheriff’s Office has charged a Smithsburg man as the result of a vehicle pursuit.

In the 17100 block of West Washington Street, the Subaru veered off the right side of the roadway through a corn field, where the vehicle became disabled into a tree.

As the deputies approached the Subaru on foot, they observed the driver exiting the vehicle and fleeing westward into the woods.  Deputies pursued on, but lost sight of the suspect as he entered the thick brush.

A perimeter of the wooded area was established, and K-9 Officers from the Hagerstown Police Department arrived on scene to assist in locating the suspect. One of the K-9 Units located the suspect hiding in the woods; the suspect was taken into custody.

The suspect was identified as Adam Clark Monk, 42, formally of Smithsburg. Monk was transported to Meritus Medical Center for treatment of the bites he sustained from the K-9 Unit. He was treated, released and then transported to Central Booking for processing. 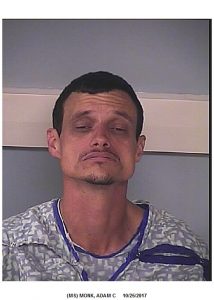