Clear Spring man has been arrested for stalking and assault.

It was reported to deputies that a male had been watching three (3) juvenile females, who were at Clear Spring Park. The females became uneasy over the male’s presence and left the park. The male proceeded to follow the females from the park to the McDonalds.

One of the females called her mother and advised her of the incident. When the mother arrived on scene, the juvenile pointed out the male, who was seated in a purple Oldsmobile in the parking lot of McDonalds.

The mother pulled behind the parked Oldsmobile and honked her horn. The Oldsmobile proceeded to back into the front of the mother’s vehicle, and then drive away. The mother followed the Oldsmobile until it stopped in the area of the Clear Spring Pharmacy.

The male exited the vehicle, went to the mother’s vehicle and started to punch the drive side window, yelling at her to get out; he was going to kill her. The male continued the same actions on the passenger side of the vehicle, where an elderly female was seated.

The mother obtained the license plate number of the suspect’s vehicle before leaving the scene. She then met with Sheriff’s deputies at the McDonalds to report the incident.

The Sheriff’s Office identified the suspect as Frank Anthony Laredo, 19, of Clear Spring. Laredo was arrested on November 8, 2018 on an arrest warrant for 2 counts of Assault 2nd Degree and Stalking. He is currently being held at the Washington County Detention Center on no bond. 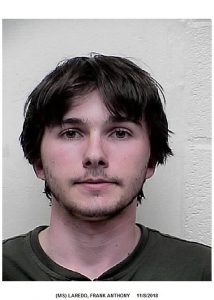