While conducting an investigation into subjects soliciting children online for sexual acts, Deputies with the Washington County Sheriff’s Office identified Robert Joseph Shepherd as a suspect engaged in this type of behavior.

Acting in an undercover capacity, Deputies engaged Shepherd in an online conversation over a period of multiple days, during which Shepherd discussed sexual acts with a person he believed was an underage female. Plans were made for Shepherd to meet the child and for them to then engage in sexual acts. This meet was scheduled to occur at a location in Washington County on the afternoon of April 12, 2017. When Shepherd showed up at the location where the meet was scheduled, he was placed under arrest.

Shepherd is currently being held at the Washington County Detention Center on no bond awaiting an initial appearance before a judge. 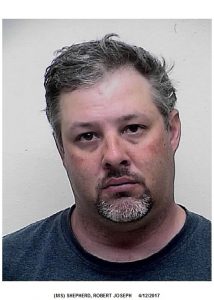