A family friend came to the house at approximately 11:00AM to collect several bales of hay.  The family friend stated that it appeared that no one was home and the family’s truck was missing. The property is a working farm with cattle that require daily care, he noticed the cattle had not been fed or watered. Additionally, a neighbor made contact with the family friend because Jack Rowland, who lives in the residence with his mother, Evelyn Rowland, was supposed to meet him earlier in the morning and never showed up.

The family friend contacted a family member and informed her of their concerns for Jack and Evelyn.

They advised Deputies that the family friend checked the house at the request of the family member and located Jack and Evelyn deceased within the residence.

During a search of the house it was discovered that a single shot shotgun was missing from a gun cabinet within the residence. It was also determined that the rear door to the residence had been forced open.

During the course of the investigation, Detectives received information that Evelyn’s grandson has been caught stealing from the farm and other family members. The Grandson was identified as Darren Scott Warner, 24, currently of Smithsburg. Detectives were also advised that Warner had lived at the residence for approximately 4 years and was familiar with the house and property.

A look out was given to law enforcement agencies within Washington County and surrounding areas for the GMC pickup truck stolen from the farm.

Shortly after the lookout was given, Smithsburg Police passed a residence at 12110 Crystal Falls Drive and observed the stolen GMC pickup in the drive way of the home.

A perimeter was set around the residence; the Washington County Special Response Team responded to the residence and took Warner and Oyler into custody.

On Thursday, May 3, 2018 members of Criminal Investigations Unit of the Washington County Sheriff’s Office executed a search and seizure warrant at 12110 Crystal Falls Drive, the residence of Darren Warner and Destiny Oyler

The keys to the stolen pickup truck and clothing items with dark stains, consistent with possible blood spatter, were located within the residence.

Both are currently being held at the Washington County Detention Center on no bond.

The Sheriff’s Office is seeking the community’s assistance;

We are asking that is anyone who has purchased equipment, tools or machinery from either Warner or Oyler within the last couple of days; please contact Lt. Alton, 240-313-2185.

We also ask that anyone store or business that may have had accepted a large amount of coin currency from either suspect within the last several days, please contact Lt. Alton. 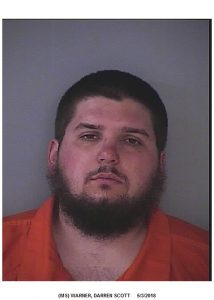 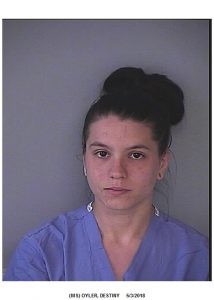