The Washington County Sheriff’s Office has charged a man in connection to a shooting which occurred on May 15, 2018 in Funkstown, Maryland.

Raoul Jermar Smith, 38, of Hagerstown, is charged with 2 Counts of Attempted 1st Degree Murder, 2 Counts of

Through their investigation and review of security footage from the area, Detectives determined the shooting stemmed from an altercation that began at Joker’s Bar and Grill, located at 2 West Baltimore Street, Funkstown.

Detectives obtained surveillance footage which shows Smith firing four rounds from a handgun as he chases a van containing other parties from the initial confrontation out of Funkstown. No one was injured as a result of the gunshots; however, the van was struck.

Smith is currently being held at the Washington County Detention Center on no bond. 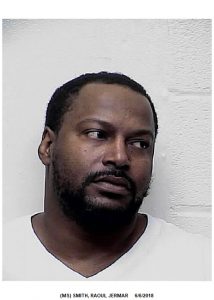