The Washington County Sheriff’s Office has arrested two individuals for Theft from Motor Vehicle and Possession of a Stolen Vehicle.

On February 2, 2017 at approximately 1:00 AM, Deputies responded to the 9300 block of Morning Walk Drive, Hagerstown, for reports of suspicious persons.

Deputies spoke with the caller who said his vehicle had been rummaged through and he observed one male crouched behind his vehicle and another male near-by. Both males fled the area after observing the caller. Property from inside the caller’s vehicle was located along the path that the suspects fled.

During a search of the area, a Deputy observed a Chevy Cobalt driving in a suspicious manner. The Deputy conducted a license plate check of the vehicle, which returned as stolen. The Deputy activated his emergency equipment to initiate a traffic stop on the vehicle. The vehicle continued to drive down several streets, finally stopping in the driveway of a residence on Dumbarton Drive. The driver of the vehicle exited the vehicle and fled. The front seat passenger, identified as Stephen James St Clair, remained in the vehicle and was detained.

St Clair was identified as one of the males from the original call.

Maryland State Police Aviation (Trooper 3), assisted the Sheriff’s Office in locating the driver of the vehicle, identified as William Jacob Pierce. Trooper 3 was able to locate Pierce after a citizen reported to 9-1-1, that they observed a male running towards their house. Pierce was also identified as being one of the males from the original call.

Stephen James St Clair, 18 of Inwood, West Virginia and William Jacob Pierce, 18, of Martinsburg, West Virginia, are both charged with 2 counts of Rouge and Vagabond, 1 count of Theft less than $100 and 1 count of Possession of Stolen Motor Vehicle. Pierce if also charged with several traffic citations as a result of the incident.

Both males were transported to Central Booking for processing. St Clair was released on Personal Recognizance and Pierce is currently being held at the Washington County Detention Center on a $7,500 bond. 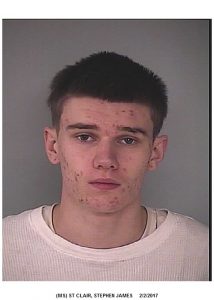 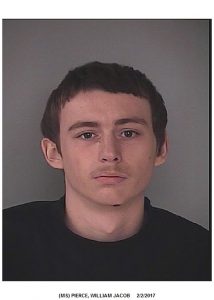